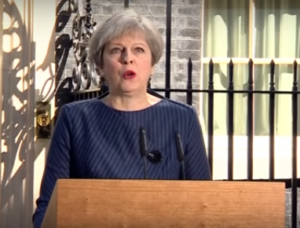 On the 18th of April 2017 UK Prime Minister Teresa May announced a snap general election. For months political commentators had been speculating that this might happen, as the opposition parties were weak and the time looked opportune. Conservatives were strong and Prime Minister May needed a strong mandate to help with the exceptional political circumstances that the Brexit vote and subsequent resignation of David Cameron left behind.

On announcement the argument provided was exactly this; that the Prime Minister wanted to build on her majority to make sure that the Liberal Democrats, Labour, SNP and others were unable to effectively block her vision of Brexit when negotiations and the two year transition period are complete.

Despite the overwhelming current poll results which are in her favor, this is another huge gamble from the party which gambled with Brexit and lost. What is at stake is further chaos and disruption at a time when the UK is already struggling to keep its head above water, keeping financial and currency markets stable and negotiating something which has never been done before against 27 recently jilted economic partners.

In recent memory, the political situation in the UK has never been so chaotic and the prime minister is hoping that this result will stabilize things by giving her government more power, but it might have other unintended consequences.

The election may not prove to be as predictable as it currently appears and the conservatives may be overstating their popularity. By normal UK standards this current government is weak, through multiple humiliating U-turns and a number of British industries scathing towards the decisions it has been taking.

Exactly how ‘remain’ voters see the Conservative party will likely decide this general election. If Teresa May comes to be viewed as a Brexit Politian who is taking a hardline and personally responsible for Brexit then the result of the election could be in question. If she is seen as reluctantly doing her best to save a sinking ship, then the Conservatives may receive the landslide they are wanting. But either way this is a frivolous political manoeuvre at a concerning time.