A nationalized energy industry had operated in the United Kingdom for more than 40 years but it was gradually reformed with the introduction of market liberalization in the 1980s. Market liberalization was followed by a large-scale industry privatization fully completed in 1998.

The competition injected in the industry through these reforms has been concentrated on generation and supply of gas and electricity. However, evidence from the Office of Gas and Electricity market (Ofgem), the body responsible for the regulation of the system, shows that the market is far from competitive.

The main companies operating in this industry, known as “the big 6”, are Centrica, EDF Energy, E.ON, Npower, Scottish and Southern Energy and Scottish Power. Together, they are responsible for the supply of close to 90% of energy (gas and electricity) to domestic and industrial consumers in the United Kingdom. Moreover, the same companies operating in the retail market produce close to 70% of the energy supplied to the wholesale market. They are vertically integrated.

The implications of the lack of competition are reflected on prices charged by major suppliers. In competitive markets, price increases from one leading company are seen as a golden opportunity for direct competitors to decrease or keep their prices at the same level and, consequently, enlarge their client base and profit margins. However, within the energy sector in the UK, coordination between the biggest 6 suppliers is producing price distortions. The “big 6” are moving away from price competition and towards a coordinated equilibrium with higher prices. 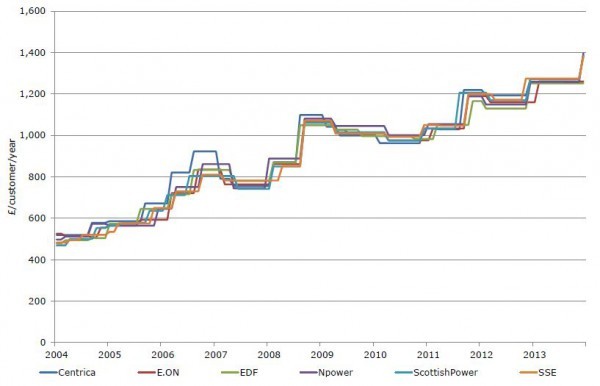 According to Ofgem analysis, energy suppliers in Great Britain are changing their prices to consumers in tandem. Following the announcement of a price increase or decrease by one of the 6 biggest energy companies, the other suppliers or “followers” will react in the same direction within a couple of days. This pattern becomes clear by the analysis of public price announcements undertaken by Ofgem in 2014 and fully discussed in my case study.

Overall, it shows that price change announcements between 2003 and 2014 are clearly following a pattern in the energy sector. Since the full privatization of the industry in 1998, there have been 12 rounds of price increases and only 5 rounds of price decreases. In every round of price adjustments, the leading company’s price announcement is followed by a similar wave of price changes from the followers.

Interestingly, the company leading the announcement of a price increase changes over time because it tends to get bad press and is, consequently, heavily criticized by consumers group. E.ON, for example, first announced a price increase in October 2003. However, in October 2013, as a follower, it was the last company to adopt the change in order to be less criticized in the media.

Consumers will find savings opportunities in the short term, if they switch from a leading supplier that is announcing a price increase to a follower supplier that is yet to announce any changes. Additionally, smaller suppliers, which are not coordinating with main suppliers, may offer better prices. In the long run, however, the wave of price increases from all the suppliers will swallow all the price differences and the opportunities to save by switching suppliers.

As a result, the combined earnings before interest and tax (EBIT) of the major suppliers increased by £700m between 2009 and 2012, according to Ofgem analysis. Ofgem also demonstrated that the average price of standard dual fuel direct debit tariffs increased approximately 24% whereas the total costs of the suppliers increased by 13% from 2009 to 2012.  Marketline forecast for the energy retail in the Great Britain is estimated to be close to £40bn in 2017. It is important to stress that a high degree of uncertainty lies around this forecast. The figure below presents the central growth forecast for electricity retail with an area of uncertainty based on the short term development of this market. 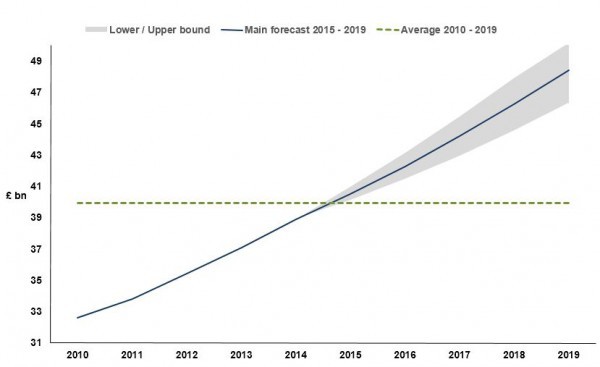 What’s the outcome of the privatization? The industry moved from a state-controlled monopoly to an open competitive market with robust evidence of coordination. Ultimately, competitors within the industry are able to achieve, monitor and sustain coordinated outcomes. It financially benefits them at the expense of consumers.