Brexit – the meaning of a messy divorce for the Euro area.

The lending channel between many industries and banks in the Euro area has been far from normal since 2008. This factor puts Britain in a better position to negotiate Brexit next year. The Euro area will embark on a period of further unprecedented slowdown by detaching itself from the world’s fourth largest economy.

Credit to industries coming from the banking sector is key for the region to grow as the single currency area has a bank-based model as opposed to a capital market model. Debt financing to companies is largely undertaken by banks. These companies are financing close to 70% firms’ investment compared to roughly 25% in the United States.  However, credit lines dried out since Great Financial Crisis. 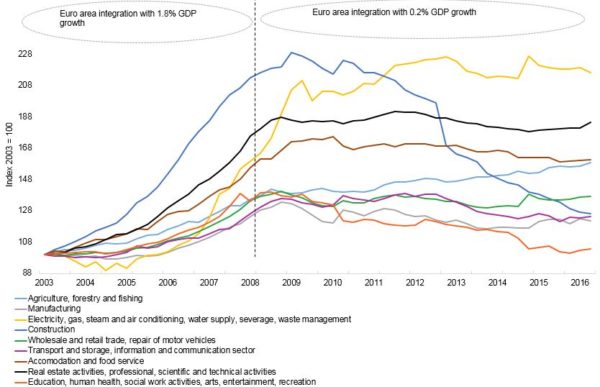 The left-hand side of the figure visually shows the volume borrowed by industries from 2003 to 2008. This volume of credit to business, spread out between many industries, contributed to the increase of GDP to 1.8% growth per year. The right-hand side shows businesses and banks entering into a dark period which was comparable only to the recession of the 1930’s.  The volume borrowed in most cases dropped to unimaginable low levels. This wave has been caused by the paralysation of the banking sector and stagnation of the Euro area economy since 2008.

Within this context, two effects contributed to the economy’s slowdown during the last 9 years. First, private business in all industries drastically reduced the amount of loans taken from banks due to the lack of consumer demand. Second, thriving businesses, which were only marginally affected by downturn, were starved of credit due to the partial paralysation of the banking sector. Both effects combined contributed to the economic slowdown of the Euro area during the last 9 years.

The financial system has an essential intermediary role in our society. To tackle the economic downturn of 2008, the European Central Bank launched a range of financial programs re-establishing credit conditions by accelerating inter-lending between banks and providing liquidity to troubled banks. The programs have been successful in avoiding bank failures on a large scale but it enormously failed to indirectly support other industries. 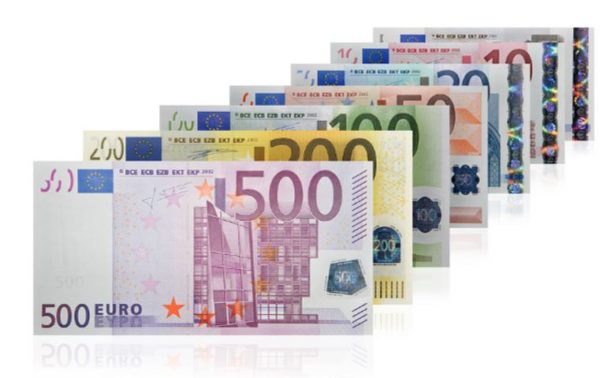 Not only the Euro area economies but also European union economies, including Great Britain, have embarked on a period of unprecedented downturn in 2008, followed by a fragile recovery during the last 9 years.

The imposition of a messy divorce will depress even more the flow of loans to industries in the Euro area due the loss of an important trade partner. Billions of euros’ worth of investment opportunities will cease to exist in years to come and, more importantly, the creation of thousands of jobs will disappear into thin air.