An inconvenient truth about the euro area

The creation of the euro area was a mistake. Top ranks of business and political classes in Europe were expecting an explosion in trade and economic activity following the creation of the single currency area in 2002. The euro would lubricate the integration of the newly formed euro area. It would be possible to achieve higher levels of growth and long-term prosperity.

It would have been unimaginable to foresee the dismal performance of the euro area in 2002. Fourteen years on, signs of failure of the single currency project crop up every time economists crunch the numbers about its economic performance.

The European Central Bank (ECB) was quickly created to become the main pillar of the monetary union. It printed close to EU7tn in 2002 to keep the new economic system running smoothly. Euro coins and notes were introduced by the bank to the public of fourteen European countries. It acts as the lender of last resort of the banking system, sets interest rates and actively trades on currency markets. The bank is the main pillar of the economic structure of the euro area ready to fight against inflation at any cost. The euro area expanded from 14  to 19 countries during the 2006-2015 period.

The fixed exchange rate came at the expense of the export industries and entire economies. Before the introduction of the euro, the bank of Italy, for example, by actively trading on exchange markets, could adjust Italy’s exchange rate to make its exports cheaper in relation to any other currency. Preferably in relation major trade partner within the euro area.

There’s no better way to adjust the economy from a weak period internal growth than reducing the relative value of the currency to temporarily increase exports and internal production. Euro area countries opted out of this crucial adjustment mechanism.

The relative performance of euro area countries, in terms of volume of goods and services generated, unfolds a striking economic reality, partially brought by the elimination of the exchange rate mechanism. This performance indicator, as explained by the Eurostat, “eliminates the differences in price levels between countries allowing meaningful comparisons of GDP between countries”. In addition, Eurostat puts as follows: “If the index of a country is higher than 100, this country’s level of GDP per head is higher than the euro area average and vice versa”, which is the case of Germany.  At any point in time, Germany,  which has been struggling to grow for more than 14 years, has been posting a better performance compared to other euro area countries. 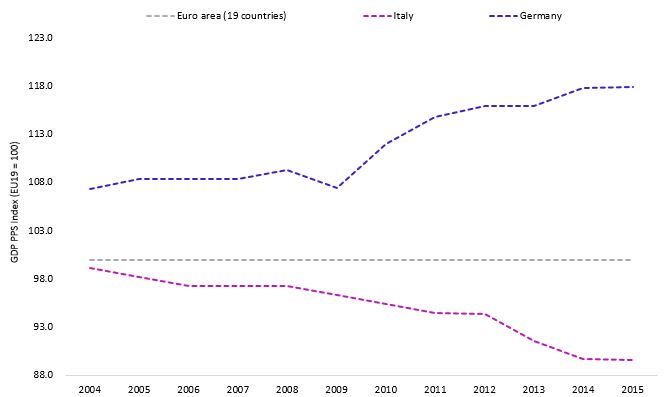 There is a tendency at the ECB to blame the Great Financial Crisis for the under performance of the euro area in recent years. It fails to acknowledge that there are serious underlying flaws in the economic design of the euro area, which are responsible for the current economic limbo.

One of the major flaws is the adoption of fixed exchange rates between country members. The elimination exchange rate fluctuation in the euro area was a mistake. There are clear signs that economies are not integrating but diverging from each other. If business leaders and government bodies knew about it in 2002, they wouldn’t have launched the euro in the first place or even though about the creation the ECB.