Ford’s autonomous cars due for release in 2021

Ford, one of the world’s largest automotive and mobility companies, announced that it will be developing autonomous cars for use by 2021.

As part of this goal, Ford will be investing in several startups, continuing its trend of making investments in technology in recent years. For example, Ford’s recent technology investments include Easy Access Door System, Active City Stop, Hands-Free Tailgate, and Active Park Assist. In the announcement, Ford said that it will also be investing in companies developing advanced algorithms, 3D mapping, LiDAR, and radar and camera sensors. These will all help Ford in its 2021 goal. 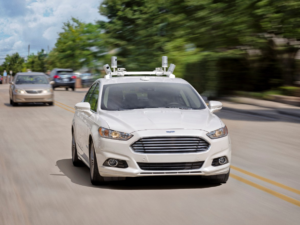 Ford’s cars will compete with cars developed by tech companies Google, Apple, and Tesla. Ford’s car will be at a Level 4 level of automation (a high level: the car is able to operate, unmonitored, in a particular use case), matching Google’s, and exceeding Tesla’s Level 2 (semi-autonomous: drivers may disengage from physically operating the vehicle but must be ready to take back control at any point) car. Ford is not convinced of the safety of Level 2 cars.

Ford is primarily developing these cars for use by taxi services such as Uber and Lyft. This narrow focus puts Ford more in competition with technology companies rather than its traditional automotive rivals. Companies such as Uber and Lyft are extremely keen on self-driving technologies: both see self-driving cars as integral to their business models in the next five to ten years. Unlike these companies, the general public is still rather untrustworthy of autonomous cars. However, studies have shown these feelings can be quickly reversed when exposed to these types of vehicles.